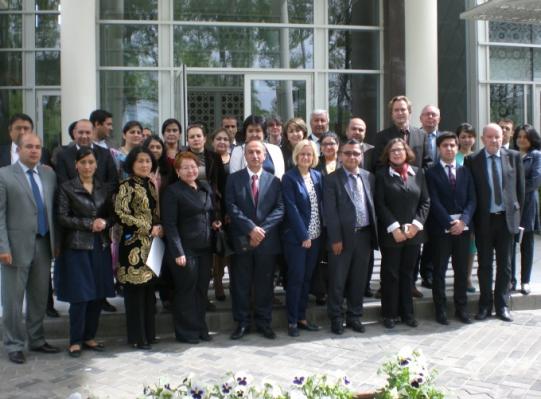 A two-day regional workshop on sustainable and green hospital infrastructure was carried out mid-April within the Greening Hospitals – Integrated Infrastructure Competence (GH-IIC) Project which has been implemented by two German consultancy companies, EPOS Health Management GmbH and ETLog Health GmbH. Hospitals have hazardous ecological footprints, due to their operations requiring high consumption of energy and water and generating hazardous healthcare waste. The greening hospital concept strives to reduce the potential negative environmental impacts and to minimize potential risks.

Close to 50 participants from the national healthcare authorities, pilot hospitals, international organizations, including GIZ, KfW, WHO, UNDP and ISWA, participated in the workshop, which was headed by the Deputy Minister of Health, Mr Navruz Junaydulloevich.

In addition, representatives from Kazakhstan and Kyrgyzstan took part in the workshop. During the first part of the workshop, the Greening Hospitals project and its results were presented and Roza Nodirshoeva, from the Tajik National Research Institute for Gynaecology, Obstetrics and Perinatology, reported how the new concepts and strategies had been implemented at her hospital and how proposed recommendations had been integrated into the existing legal healthcare framework.

The Concept Manual on integrated infrastructure was launched (available in English, Russian and Tajik) and recommended by the Ministry of Health as a future guide book for the operation of hospital infrastructure in Tajikistan.

In the second part of the workshop and as a follow up to the conference “On the Future of Biosafety and Biosecurity in Central Asia (2014)”, an exchange of experience for the management of healthcare waste was carried out and representatives from different countries presented their local situation action taken. A further workshop on this topic is planned to be carried out in 2016 in Kazakhstan. Participants also visited the pilot hospitals to learn how integrated “green” infrastructure management systems helped the hospital to improve environment and hygiene to lower their ecological impact.