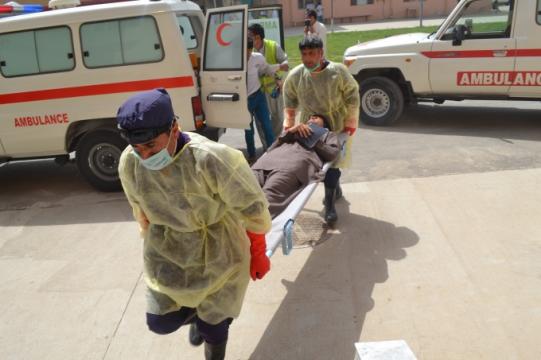 Kunduz Regional Hospital conducted a full-scale mass casualty drill on April 16th with 250 people taking part. The drill was designed to test how ready and responsive the newly refurbished facilities will be in case of a severe emergency. The findings of the drill will be used to identify room for improvement and shortfalls in protocol and contingency plans for large-scale crisis responses.

Conducted in response to a campaign by the World Health Organization to improve preparedness in Afghan health facilities for mass-casualty scenarios, the drill was organized and run by the Kunduz Regional Hospital management with assistance from Afghan-German Development Cooperation. The drill allowed hospital staff to familiarize themselves with the new layout of the hospital, where rooms are in the new facilities and procedures for emergencies. Kunduz Regional Hospital has undergone refurbishing and extension work as part of the 'Rehabilitation of Hospitals in Northern Afghanistan' project funded by the German Federal Foreign Office, managed by KfW Development Bank and implemented with technical assistance by EPOS Health Management.

Drills like these help staff learn how to maintain order when chaos breaks out, also for the benefit of patients and relatives. The need for systematic preparation, training and exercise is evident. None of the principal health facilities in Afghanistan has undertaken large-scale drills yet – despite the fact that this is an extremely important measure for preparing for large-scale emergencies. Medical staff who have experienced proper mass emergencies describe scenes of chaos. Patients are impossible to track, there is a lack of coordination and staff is not distributed to where medical attention is needed most.

The exercise simulated an explosion leading to surgical injuries, burns, asthmatic attacks and cardiovascular problems with a total of 120 people and was covered by national media. A camera team was able to document the drill in otherwise sterile medical environments that are normally inaccessible. The camera team also interviewed participants after the exercise. The documentation can be used for future training purposes.