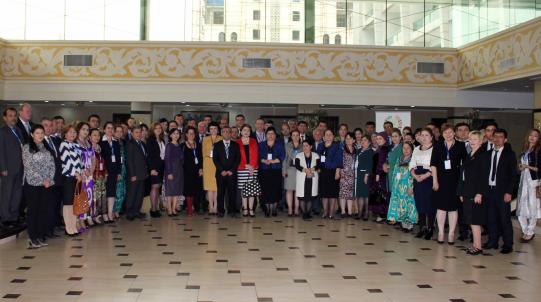 The project «Technical Assistance to Support the Strengthening of the Health Information System in Tajikistan”, funded by the European Union (EU), has organized the final project roundtable with the participation of Deputy Minister of Health and Social Protection of Population, EU Ambassador to Tajikistan,  Minister of Justice, Vice Minister of Justice, Adviser to the Minister of Health and Social Protection of the Population, WHO Country representative to Tajikistan, First Deputy Director of the Agency of Statistics under the President of the RT, Managing Director of EPOS Health Management,100 specialists from all regions of the RT and international donor organizations and projects.

The project has been implemented over the past 42 months. A central information system, DHIS2, has been fully adapted to perform the functions of data entry, analysis, and reporting for the Ministry of Health and Social Protection of Population (MoHSPP) and has been used nationwide for online data entry since January 1st, 2015. The health statistical reports for years 2014 and 2015 have been successfully entered in on-line mode in DHIS2. For the Ministry of Justice (MoJ) and Civil Registration Offices (CRO), DHIS2 has been adapted for entry of 7 forms of acts of civil state and since January 1st 2015, all civil registration acts are entered in DHIS2 in online mode.

About 2200 specialists from the MoHSPP and 500 specialists from the MoJ, CRO have been trained in DHIS2 system use, statistics, ICD-10 coding classification and other training activities. Five international study tours to: Norway, Moldova (3), and India have been organized for the representatives of the MoHSPP, MoJ, CRO, AS under the President of the Republic of Tajikistan. As a result of the project, the DHIS2 use, data quality and utilization and evidence decision making was institutionalized in curriculum of Tajik State Medical University named after Abuali ibn Sino and Institute of Postgraduate Education in the Field of Health Care of the RT.

The project contributed to the revision of primary medical documentations, statistical reporting forms, causes of diseases and death’ encoding according to ICD-10 classification etc. One of the project results was assisting the Republican Center of Medical Statistics and Information in creation a website which allows health professionals and general public and the general public to access DHIS2 health indicators (http://www.medstat.tj). The implementation of an information system contributes to timely access to qualitative data and evidence based decision making in management, and to a quality improvement of demographic data in the RT.