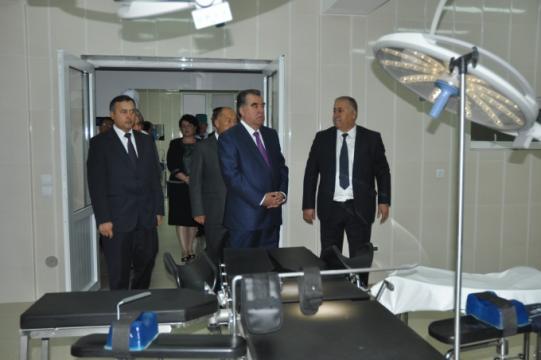 The President of the Republic of Tajikistan, Emomali Rahmon, inaugurated the partly renovated and refurbished central district hospital in Yavan on November 12th. Renovation and equipment of the facility, which includes the departments of obstetrics and gynecology, diagnostics, a clinical and biochemistry laboratory, intensive care department, a newborn intensive care unit and neonatology, two operating theaters, administration rooms and support services, was jointly financed by the Government of Germany and the Government of Tajikistan under the KfW-funded and EPOS/GOPA/Irfat-implemented Mother and Child Health Project Phase I.

Within the context of the project, another new building of the central district hospital in Huroson Central District district was inaugurated last month (accompanying photo) and additional renovations and equipment provision are nearly complete for central hospitals in Farkhor and Hamadoni districts.

The €10M Mother and Child Project, launched in 2009, supports the Tajik Government in modernising hospital structures and the provision of improved mother and child health services in the Khatlon province. The project supports improving the overall health status of the population, thereby helping the country to reach Millennium Development Goals IV and V. Additional financing agreements of €31.5M were signed this year to support phase two of the project.