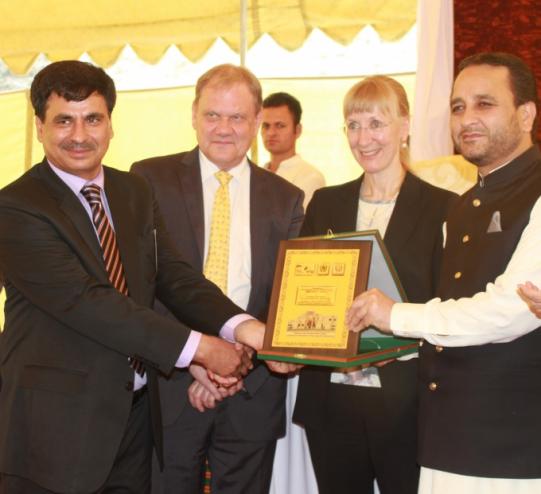 The recent inauguration of a modern Regional Blood Center (RBC) in Gilgit, developed by the German government through the KfW-funded and EPOS-implemented Safe Blood Transfusion Project, marks a new era of blood safety.

The center will serve as a blood procurement and distribution center, ensuring quality systems to regulate all activities including mobilization and retention of voluntary and regular blood donors, maintenance of donor database, collection of blood donations as well as processing, screening, testing, component preparation and storage of the prepared components,

The Gilgit Blood Center is one of the 10 RBCs developed by the German government as part of the first phase of establishing of a nationwide network of 10 modern blood centers and an up-grade of 60 existing hospital based blood banks nationwide. The second phase of the project began this month and will expand in scope and coverage, through continued KfW funding, with the creation of more Regional Centers supporting hospital blood banks.

Speaking on the occasion, the Chief Minister expressed his appreciation to the German government for the gift of a Blood Center to the people of the region. He also thanked the German Ambassador and the KfW Country Director for coming to Gilgit for the Inauguration ceremony. He acknowledged Prof. Zaheer for his leadership and commitment in steering the Blood Project with exemplary zeal and devotion.

The Chief Minister committed full support for the smooth functioning of the new Center and the implementation of the Blood Programme in the region. He also announced that his government is processing on a priority basis the promulgation of the Blood Safety Act and the establishment of the GB Blood Transfusion Authority. He also announced the construction of a road up to the RBC, immediate appointment of staff, procurement of consumables and cold chain vehicles. He said the GB Government will contribute for the construction of a RBC in Skardu.

The German Ambassador congratulated the Chief Minister for personal interest in the implementation of the Blood Project in his region, as well as for organizing the first inauguration of the Phase I project infrastructure. She expressed the hope that this Center will herald a new era of blood safety for the people of Gilgit-Baltistan. She also announced that the German government has continued its support of the project for the Phase II, providing €10 M.

Prof. Zaheer, National Coordinator of the project, spoke about the Management Information System which has been especially developed by the Programme for the smooth functioning of the new system, including this Center and its linkage with the hospital blood banks as well as the Gilgit-Baltistan Blood Programme.

Following the inaugural ceremony, guests visited different sections of the Blood Center and inspected the new equipment and refurbished areas.