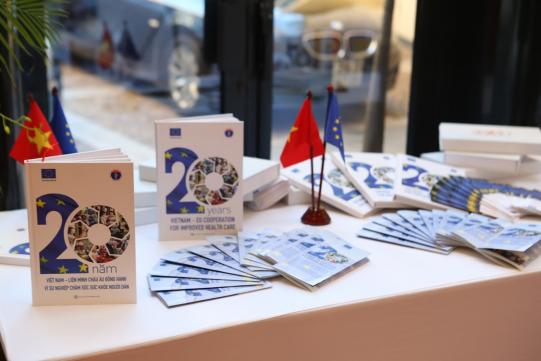 The ceremony included the launch of the publication “20 Years of Vietnam-EU Cooperation for Improved Health Care”, highlighting the initiatives and outcomes of strong cooperation over the period spanning 1995-2015.  Commissioner Neven Mimica said that "the EU, including the EU Delegation to Vietnam and the EU Member States, was delighted to contribute to the attainment of the Health Millennium Development Goals in Vietnam. Between the year 1995 and 2015, the infant mortality ratio has been cut by half in Vietnam (31.2 to 15.3 per 1000 live births).” The Commissioner also highlighted the fact that the EU would broaden the scope and the magnitude of partnership and cooperation with Vietnam, through the adoption of the Partnership and Cooperation Agreement and the completion of negotiation on bilateral EU-Vietnam Free Trade Agreement.

The ceremony was held as part of the visit by Commissioner Neven Mimica, which takes place from 16 to 18 November, 2015. In attendance at the event were Ambassadors of EU Member State Embassies, the Vice-Minister of Health, heads of departments and divisions from the Ministry of Health, senior representatives from other Government ministries and agencies and representatives from other development partners in the health sector. Commissioner Neven Mimica also announced an agreement of 8.3 million EUR to support a trust fund for health professional education and training in Vietnam administered by the World Bank.

Speaking at the publication launch, Minister Nguyen Thi Kim Tien noted that “during past 20 years, the EU has always been an important partner of the Ministry of Health. The partnership has over time strengthened as we work towards a common goal: a health care system toward equity, efficiency and development, improving quality of care for meeting the growing and diverse needs of all Vietnamese people. Support from the European Union and its Member States has contributed significantly to increasing both the quality and availability of health care and through that to the improved health of our people.” The Minister called for continued technical and financial support from the EU for the modernization of the health system and acceleration of sector reforms.

The book “20 Years of Vietnam-EU Cooperation to Improve Health Care” has been prepared for the EU Delegation by the EU Health Facility, established by the Delegation to support stakeholders in achieving  targets defined in the Health Sector Policy Support Programme, phase 2 (HSPSP-2, 2015-2018). The book describes the activities implemented and results achieved in improving health care between 1995 and 2015 with support from the European Union and its Member States.

The Agreement between the European Union and the World Bank covers the €8.3 million of funding that the European Union has agreed to contribute to the World Bank-administered Trust Fund to support the Health Professional Education and Training Project, which is a complementary support to the HSPSP-2 and contributes to its objectives. Activities will include clinical training courses and on-the-job training for a wide range of health care staff, curriculum development, evaluation and monitoring.